You are here: Home / Extreme How-To / When Stairs Fall Down 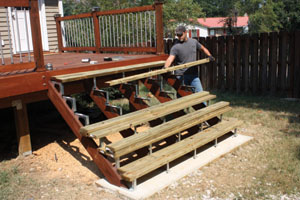 A particular news story caught my attention during this holiday season. During a Christmas gathering, twenty members of a Kentucky family gathered on an exterior staircase when—bam!—the thing collapses beneath them. Eight people were injured in the fall, with six requiring a trip to a nearby hospital.

“The person at the top probably fell about 20 feet,” the director of the Hardin County EMS told Yahoo News. “All of our ambulances that were on duty that day responded.”

Two things struck me about the story. First: Why would you stack so much weight on the stairs, especially on an outdoor case where you can plainly see how it’s built? Second: These folks probably saw the construction but didn’t have an understanding of its limitations.

The news report failed to show the fallen staircase but did show footage of “similar” staircases in the neighborhood, some of which had no central post to support the outer stringer. If that is how the collapsed case was built, then it’s no surprise the thing fell apart under such stress. Was rotted wood or inadequate fastening a factor? The story didn’t say.

I’m unclear on the gross weight capacity of the average set of residential stairs. However, even if the family was fit as a fiddle with ten women at 130 lbs. and ten men at 170, you’re talking about 3,000 lbs.—and that’s a heavy load.

The good news is that no one was seriously injured, and two women who were pregnant happened to be positioned at the bottom of the case. One of them was taken to the hospital where she gave birth to a healthy child. So, in the end, the family lucked out.

This story is a prime example of why it’s such a smart idea to gain an understanding of how your home is built and how the different components perform as a system. Not only is this valuable knowledge when making improvements and repairs, but it’s a great way to learn just what your house can do—and what it can’t.