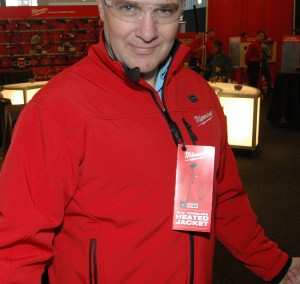 Never before have I fielded so many questions regarding a product test.  Last summer in Milwaukee I had the chance to try out one of the pre-production heated jackets, but I don’t remember noticing the lighted M12 Logo.  I don’t know whether this was added later or whether I just missed this detail, either way it is brilliant marketing. While picking up supplies at the local Lowe’s, I noticed several people looking my way with looks that lasted a lot longer than the normal stares a tall scary guy gets. One of the Lowe’s employees came up and asked me what I had.  I thought he was asking about the insulation I was picking up. Nope, he wanted to know why my bright red jacket had an ET glow light.  I had forgotten about the lighted logo feature, but obviously others were noticing it.

I explained to him what the light meant and how if it was red, it meant I had the heat turned on high, white meant medium and blue indicated a low heat setting.  Soon I had a crowd around me asking if the jacket could be worn while skiing, hunting, watching ball games in the cold, etc, etc.   One teenager wanted to try it on, I declined. If he tried it on and decided he liked it enough to run off with it, I am too old to chase anyone very far.

The last few days have been cold and rainy, so I have spent a lot of time in the M12 Heated Jacket.  No matter where I go, the jacket draws attention and questions. If you want to go unnoticed, do not get one of these. The jacket draws crowds.

This may be the first time I have ever used the words, “cool” and “work clothes” in the same sentence, but it is what it is, The M12 is cool, well actually hot, and meant to last a day in the field being worn by contractors or anyone else seeking a comfortable jacket to work in.  I like it best early in the morning. Jumping into a cold car without heated seats is not much fun, but now I just turn the jacket on beforehand and off we go in comfort. Sitting in a tree stand exposed to the elements, the Milwaukee jacket kept me body core warm and toasty.   While working up a sweat using my chainsaw, I turned the jacket off but as soon as I took a break from cutting, I could feel a chill begin to work its way down my back. Not a problem anymore, I turned the jacket back on and within a few minutes I was toasty warm again. As I sat there with my back and torso all warm, I wished that Milwaukee would come out with corresponding pants so my legs could laugh at the elements also.

Milwaukee expects its heated jackets to be available before Christmas and they will be a great hit with anyone lucky enough to get one.  The jacket is available in various sizes. It has cinch cords to seal the waist from drafts.  The sleeves have built in powder cuffs of fleece.  During the recent rains the jacket shed water very well, but I would throw a Gore-Tex shell on top of it if you are going to be in inclement weather for a longer period of time. Also throw a spare battery in the battery pouch. The included battery is lasting about four hours before needing replacement.  Two batteries would get me through a day.  I also throw on a layer of poly-pro next to my skin to wick away any sweat.   Also you better like Milwaukee Red as this is the only color the jacket is being offered in currently.  My Red Sox friends asked me why would anyone need another color.  So apologies to Yankee fans, Auburn fans and Packer fans, it comes in red alone.  I do think it would look cool if the jacket came in black with red highlights as the lighted M12 logo would really stand out against the black shell.

For more information on the Milwaukee Heated Jacket or other fine Milwaukee products check out, http://www.milwaukeetool.com/tools/cordless-tools/m12-cordless-system/m12-cordless-heated-jacket-kit/2331.