A whirlwind of projects went on this past weekend, despite the forecast of rains.  All but one of the projects scheduled were exterior and the forecast was for a rainy Saturday and Sunday, but the only rain, was a brief shower Saturday after midnight. So the projects went ahead as scheduled. With GPS in hand, I took the Husqvarna GTH-26 out for its speed trials.For more on the Husqvarna GTH26-48 Click HereI love the feeling of power when I step on the gas and the Husqvarna GTH 26 has never disappointed. From pulling ground engagement attachments to simply cutting the grass on hilly terrain, the 26 horsepower Husqvarna never seems to load up or bog down.  But how would it hold up on a flat out run of sheer speed?  On a 10% grade, 8 miles per hour was my top speed. On a flat run, the Husqvarna pumped out 9.5 mph for its top speed.  Engaging the blade had little effect on top speed. And on a downhill run, I got off the pedal long before it topped out.    Eight miles per hour on a bumpy uphill romp on a garden tractor seemed much faster, almost go kart like.

Friday night I killed time by pressure washing one side of the house in preparation for priming it Saturday.  I hate jobs that start off as mere maintenance and end up involving redoing framing, insulation or in this case replacing siding.  The redwood siding was installed in a board and batten style.  On some of the pieces, it appears that ants have gotten into the lumber and when the pressure washer was used, sections of wood turned loose.  Husqvarna’s new 6027 pressure washer develops 2750 psi of water pressure and that was plenty for this type of cleaning and paint preparation.  Loose paint peeled off quickly, revealing bare wood in many areas. I am not sure why anyone would paint redwood siding. In my opinion, redwood is one of the most attractive species of lumber and I would have preferred it in its natural state. In  my experience, redwood does not hold paint as well as other species. Its oily nature does not lend itself to paint adhesion.  My solution is to use primer, specifically I used Valspar’s Oil Based Exterior Primer.  When painting redwood, I have better success with this particular primer adhering to the wood.  After checking the primer after 24 hours, it had good adhesion and I only wish the original painters had primed the wood previous to top coating it.

Now I have another issue and maybe someone out there can suggest a solution.  This home is a modified A-frame with a peak height of 20 feet. Is there a product out there can help extend the reach of the standard pressure washing wand? Is there an extension that can be attached that would allow the user to stand on terra firma while

operating a high pressure device.  The thought of being on a ladder with 4000 psi pushing me in the opposite direction sounds like a disaster in the making.

Also this weekend I had the chance to use a tool my father and grandfather were more familiar with.  While at IWF in Atlanta, I asked Peter Harper of General Tools & Instruments to send me a compass and an inside caliper.  I needed the compass to mark up molding profiles and the inside caliper for fitting flooring planks.  The flooring job involved two rooms that are open to each other and the intersecting planks between the two rooms needed to be ripped to fit.  By using the calipers to measure the distance between the adjoining planks, I could measure and transfer the exact width to my Skil Flooring Saw and rip the pieces knowing the fit would be exact.  I transferred the distance by positioning the caliper between the saw’s fence and its blade. By adjusting the fence I was able to rip planks that fit tight.  One note here, this was tongue and groove flooring, so I cut the bottom edge of the groove out, so that when the plank was put into place the tongue did not interfere with the installation. I also used P&L’s Construction adhesive to ensure the planks would remain firmly attached to the subflooring.  I used my Milwaukee Finish Nailer to hold the planks in position while the adhesive cured.  The finishing nails were countersunk and finished with wood putty. 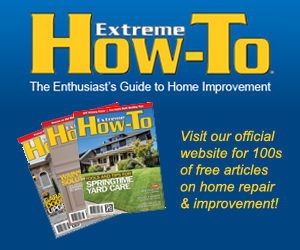