You are here: Home / Extreme How-To / Wow, what a great tool tryout weekend!

This past weekend I had a few tools to use and review that I was really excited about. Now many times, these great expectations die a quick death to the  reality in the field use trials. Well, this weekend was nothing like that.  I cannot tell you how cool the Fluke TI-32 Infrared Camera unit is.  I was looking for anything to use it on and when I turned it over to Matt this morning I felt like I was giving a way a favorite puppy.  I told him all of the things I had tried it on and for him to do likewise and come up with anything new that a thermal image could be used for. 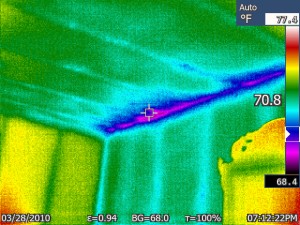 First impression, car brakes get really hot, I already knew that but what a great picture it made.  Uninsulated ceilings of tongue and groove are not very energy efficient, I knew that.  I just know it with the actual temperature leakage now. Also, 2×4 studs are really poor insulators, every stud in the wall I could see as a cold spot on the thermographer. How much energy is wasted by our studs?  I don’t know, but I assure you it is quite a lot.  Also the TI32 is the best stud finder I have ever seen, period!  Old single pane windows are very poor insulators. Weatherstrip them. It makes quite a difference.  Also, decking color and how comfortable a deck is in warm weather is a major consideration when choosing decking products.  Overloaded circuits are easily found using the TI32.  When I get the pictures converted to JPEG I will show what an overloaded main looks like.   That was not even the circuit I was checking, but wow was it hot.  Weatherproofing a garage door leads to big energy savings. Garage doors cover a large area and the old metal one at the lake needed attention to make it energy efficient.  I could watch the changes as I added seals and insulation.

Other uses I found;(how many times do you get to demo a tool that’s value approaches five figures), medical, I checked a cyst on my elderly golden retriever, my children’s skin temperatures and circulation. There must be an incredible amount of uses these devices have in the medical field.  I also checked for ghosts in an old house. I am not sure about ghost, but I did find lots of air leaks and moisture penetrations.  This tool was such a hoot to use I almost forgot what its practical application was for.

The TI32 allows an energy use surveyor to measure and document energy loss due to poor insulation, faulty windows or moisture penetrations.  For property management companies the Fluke TI32 can diagnose minor problems in individual units and check those against other units to see if a small energy loss is adding up to a major liability in expenses.  Electrical contractors can observe electrical problems without contacting the dangerous component.  The thermographer shows overloaded wiring, circuits and faulty bearings in electrical motor applications.  In a series of similar motors, such as in a pumping station you can observe which units are running hotter and therefore more likely to experience failure first.  What this means from a planned maintenance plan is you now have a tool that allows you to target problematic systems before the problem leads to a total breakdown and loss of production time.

In the future when unit prices reach consumer levels, look out this category of tools is going to take off.  Woodworkers will use these to check motor and bearings in their power tools and also see if the power cords are overloaded or cracked.  They can also see if their blades are dulling as the wood cuts show as hot spots when made with a dull blade.  Shade-tree mechanics will be able to diagnose their cars with a tool they can only dream of now.  Homeowners will finally understand what works and what doesn’t work when it comes to living green by conserving energy, for they will be able to see the losses of stud walls and windows. But they will also see how a can of insulating foam sealant can work wonders on air leaks.   And I guess moms and dads will have new tool to see if little Johnny is faking an illness to miss his algebra test, because drinking a hot drink when mom isn’t looking won’t trick this thermometer.  You can actually see areas of your body that have blood flow issues.

In business these units already have a presence that is only getting larger. No other tool can perform like these units do. The more that are sold the more efficient companies will be at making them and this is a win for us, because the units will become less expensive.  I can see home inspectors relying on these. They tell a story fast and problem areas invisible to the naked eye are no problem for an IR camera. Wet drywall loses heat at a different rate than dry drywall and paint can’t block the IR’s vision.  This can be home buyer’s best friend and a seller’s nightmare if they think a fresh coat of paint will mask the ills of years of poor maintenance. 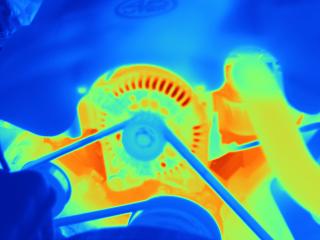 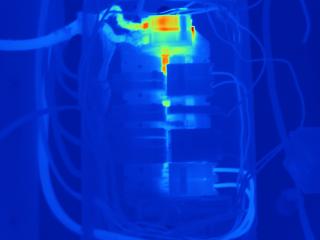 How sensitive are IR units?  Several years ago I had an inspector check a job I had done on an EFIS system. He was looking for moisture problems. He had almost finished the entire outside circumference of the house when he stopped like a forty-niner seeing something shiny in the stream bed. He called my brother-in-law an attorney involved with these EFIS cases over and both of them acted like kids that had won the golden ring. They had found the moisture. I think I made both of them mad when I started laughing and went inside.  At first I saw the image and I too thought I had a problem but when we backed up to see the entire image, I knew what we had found.  Inside the house where they were looking they had found the toilet tank for the guest bathroom.

I will write more about the test for a web site article, but I have to tell you this is an amazing tool and I only wish i could have kept it longer because I know some of you probably have ideas on things where it could be used. I shot 300 images and only realized I had saved the images in the full blown IR file type and I have to get those converted to JPEG before I can put the story together, because it is the images that really tell the story.

To see more about the Fluke TI32 check out Fluke’s web site, Fluke.